UrbanShift hosted its first City Academy in Kigali, Rwanda from May 17-19, 2022. The event brought together 75 participants from 20 cities in the region, including key national government representatives from Rwanda, Sierra Leone and Morocco.

The City Academy was officially inaugurated on May 17 by Lord Mayor of Kigali, Pudence Rubingisa,  at the Heaven Rwanda Hotel. The Mayor warmly welcomed all participants and spoke about the importance of raising urban climate ambition and the role of nature-based solutions in delivering climate-resilient urban infrastructure.

“The City Academy is a platform for UrbanShift cities to explore how these new approaches can be adopted into the urban landscape and incorporated with the activities our cities are already implementing,” the Mayor stated.

Participating UrbanShift cities had the chance to share their own experiences with climate action planning, reflecting on the successes of internal processes along with obstacles faced in working with local communities, attaining political buy-in, and focusing on high-priority actions. Based on the learnings presented by local and regional experts, such as the Global Green Growth Institute (GGGI), and the thoughtful interactive exercises, each participating city left the ICAP training with a roadmap that detailed the areas in which additional efforts were needed to support the advancement of integrated climate action planning within their individual contexts.

In the Nature-Based Solutions (NbS) training, participants had the opportunity to learn from one another and from regional and international experts on best practices related to the application of NbS in African cities. Participants heard from Africa’s first Chief Heat Officer, Eugenia Kargbo, based in Freetown, Sierra Leone, as well as speakers from Cities4Forests, The Nature Conservancy (TNC), International Union for Conservation (IUCN), International Institute for Sustainable Development (IISD), WRI Africa, ICLEI Africa and the Rwanda Environment Management Authority (REMA).

The sessions built upon one another to simulate a solid foundation for viable NbS projects – from inclusive stakeholder engagement to the elements required to enable policy and implementation – and featured Kigali’s Nyandungu Wetland Eco-Tourism Park as a case study. Participants also learned the importance of valuing nature and natural assets, which laid the groundwork for defining and applying a cost-benefit analysis for NbS. Participant experiences were spotlighted through breakout groups, exercises and presentations, and by the end of the training, each participant had prepared an action plan of next steps to advance NbS in their respective city and country and in their day-to-day work.

On Day 3 of the UrbanShift City Academy, both training tracks merged to discuss approaches for financing climate actions and nature-based solutions. Bright Ntare, Head of Business Development at FONERWA (Rwanda Green Fund), presented on the development of Africa’s largest green fund, which has played a catalytic role to finance climate actions and NbS at the national and local levels in Rwanda. Bright explained how FONERWA’s capitalization grew tenfold to $216 million in a single decade, motivating participants about the possibility of a green fund in their own cities and countries to overcome the finance barrier that many governments face in the pursuit of climate resilience.

The final day of the City Academy culminated with a visit to Nyandungu Wetland Eco-Tourism Park, a collaboration between REMA, City of Kigali, and FONERWA. Through the Nyandungu project, 120 hectares of degraded land were successfully rehabilitated and the natural wetland ecosystem restored, illustrating the intersection of nature-based solutions and climate action and posing an inspiring example of multi-level governance and stakeholder engagement.

The UrbanShift City Academy in Kigali was funded by the GEF, hosted by the City of Kigali and the Government of Rwanda, and organized by C40 and WRI in collaboration with the World Bank and UNDP. Other key UrbanShift partners include UNEP, which leads the program, ICLEI and ADB.

The next City Academy is scheduled to take place in Buenos Aires, Argentina in October 2022. To learn more about UrbanShift's capacity-building activities, click here.

Kigali: On the path toward green, climate-resilient growth

Faced with a fast-growing urban population, the Rwandan capital is working to transform itself into a model green city. We spoke with Mayor Pudence Rubingisa about his sustainability goals and priorities for Kigali. 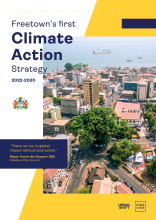 Freetown's first attempt toward delivering on its commitment to the Paris Agreement, this strategy presents innovative, evidence-based solutions to help the city adapt to climate risks while strengthening mitigation efforts.