To achieve more equitable, resilient, low-carbon societies, cities need big changes to critical infrastructure and systems. But ample research shows they can’t raise the investment needed for those big changes on their own. Municipalities depend on higher levels of government to create a fiscal environment that strengthens their capacity to raise revenue and tap into external funds, especially for large projects.

National governments, in turn, cannot by themselves create all the capacity needed, especially in developing countries. International development institutions have a crucial role to play in this multilevel effort, as does private sector finance – which, if enabled by these public actors, may be the biggest lever of all in closing the urban finance gap.

The State of Urban Finance

How much money will cities need to achieve the objectives set out for a more sustainable, equitable world in the Paris Agreement, 2030 Agenda for Sustainable Development, and New Urban Agenda? The sectors that need to change are manifold, ranging from public transit to land use, to affordable housing. As a result, estimations of the actual amount needed to transform our cities vary. But one consensus exists: It is more than what cities currently have at their disposal or could generate on their own, especially in less wealthy countries. Even national governments, which currently finance around 60-65% of urban infrastructure in developing countries, fall far short in the face of annual financing needs of $4.6-5.1 trillion per year, leaving an estimated gap of $1-3 trillion.

Studies have shown that private investment can – and must – help meet these needs. The sector is currently projected to contribute about half of the annual infrastructure finance gap between 2015 and 2030. At least part of the prescription for cities, then, seems simple: improve enabling conditions to capture as much of this private investment as possible. This means improving own-source revenue collection, getting the municipal balance sheet in order, and setting up transparent and efficient budget mechanisms to enhance creditworthiness in order to issue bonds, access loans and enter into public-private partnerships. 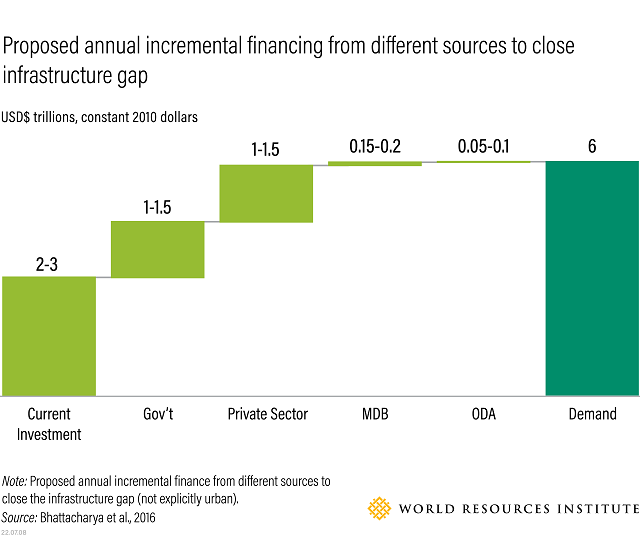 This is, of course, easier said than done. In reality, the high upfront costs and long timeframe of many infrastructure projects often create major barriers to private investment. This is where the national government as regulator and enabler comes in. National governments can create positive regulatory environments and help address persistent market failures and lack of capacity and expertise on municipal project financing by both the local government and private investors. They can also leverage the broader experience and financial depth of international development institutions.

National Government as Regulator and Enabler

In its role as the primary regulator and rule setter, the national government not only determines the scope of local spending responsibilities and revenue collection ability but also sets the regulatory framework within which a city can or cannot access capital for investment.

Take Johannesburg, the first sub-Saharan African city to issue both a municipal and a green bond. The local government was able to raise finance at the capital market to confront a deficit in electricity, water and transportation infrastructure in townships due to a clear national regulatory framework that permits municipalities to borrow while releasing the South African government from any liabilities for the debt incurred.

In contrast, the efforts made by Kampala, Uganda, and Dakar, Senegal, to consolidate their finances and improve their credit rating to launch municipal bonds have been futile. Dakar ran up against a last-minute government intervention, and Kampala against inefficiently low legal debt limits. Municipal bonds are one option for cities to raise finance at the capital market – the preferred experience of U.S. municipalities – but long-term tailored loans should not be discounted as a viable option to enable infrastructure development either.

The second role national governments must play is as enablers. A major reason for cities’ inability to leverage private finance is their lack of capacity to prepare projects in a way that appeals to investors, as well as their low creditworthiness, a measurement of trust in a city’s financial management.

While national governments are hesitant to act as direct guarantors for municipal debt, there are other ways for them to enhance investors’ trust in cities. Municipal Development Funds such as the Colombian FINDETER, public-private partnerships like the Tamil Nadu Urban Development Fund or credit enhancement facilities like the Indonesia Infrastructure Finance Facility are examples of vehicles established by national governments to mobilize private capital, often in cooperation with private sector actors and development institutions.

Recent work by the Coalition for Urban Transitions outlines public financial “readiness” and scaling mechanisms and instruments, the two strands of activities necessary for national governments to help cities scale up investment in sustainable urban infrastructure. 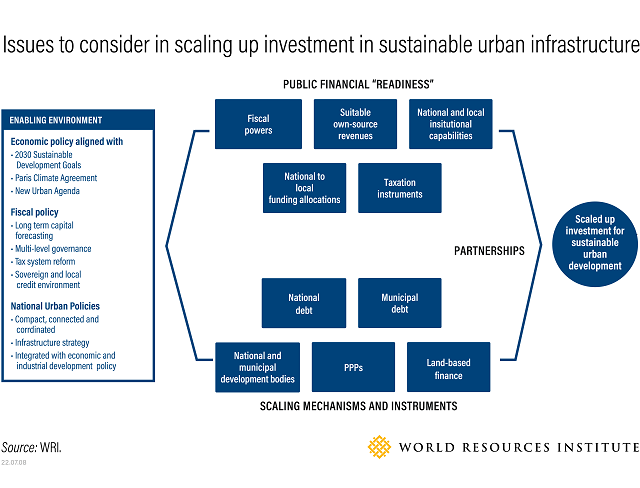 The Role of International Development Institutions

Particularly in developing countries, resources and experience with bridging the city-private investor divide are limited. If national governments are unwilling or unable to support cities in developing creditworthy projects, international development institutions can step in at various stages of the process.

These institutions directly provide capital to some of the country-specific mechanisms like the Tamil Nadu Urban Development Fund or act as guarantor for municipal bonds, as the World Bank did for Johannesburg. Additionally, capacity-building programs such as the World Bank’s City Creditworthiness Initiative, UrbanShift and the Global Platform for Sustainable Cities, work with partner cities and in global outreach to improve integrated city planning and management, setting the foundations for accessing finance.

At a more concrete project level, project preparation facilities such as the City Climate Finance Gap Fund, the UN-Habitat Cities Investment Facility and the C40 City Finance Facility support municipalities in understanding and meeting investor requirements and act as intermediaries. They fill a significant gap, as project preparation costs are estimated to amount to 3-10% of total project investment costs and are unlikely to be covered by investors.

While a relatively recent phenomenon, these project preparation facilities are promising. The 20 projects that have to date received support from C40 City Finance Facility have an aggregated investment potential of $650 million in climate-proof urban infrastructure and are inspiring replication around the world. In 2021, for example, the Ecuadorian housing ministry launched a call for climate financing proposals, with the winners receiving technical assistance to advance their projects to a bankable stage and presenting at the World Urban Forum in June.

There is clearly both demand for and supply of sustainable urban infrastructure finance, but the disconnect between both is currently so strong that it is unlikely we will see a flood of market-based investor-municipality transactions any time soon. Long-term, multi-level action, from local to national and global, is vital to building more sustainable and equitable cities, as outlined in the World Resources Report, Towards a More Equal City.

While cities must lead in increasing investment in urban services and infrastructure, national governments must take on an active role by channeling international and earmarked national funds. Where cities possess strong governance and financial management capabilities, national governments should focus on creating enabling regulatory environments. The international community must further scale up its various strands of direct support to local governments and ensure the continuity of project preparation and capacity-building facilities. Finally, the private sector, apart from coming through on prioritizing sustainable investment, needs to help develop innovative financing structures and investment vehicles that accommodate the specific circumstances of urban infrastructure investment and the tremendous need of the moment.

How Forests Near and Far Benefit People in Cities

A growing body of research shows that even forests located far away from urban centers provide tremendous benefits in regulating the global climate, water and biodiversity systems that are essential to people’s health and quality of life. 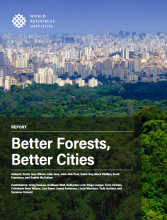 This report evaluates how forests both inside and outside city boundaries benefit cities and their residents, and what actions cities can take to conserve, restore and sustainably manage those forests.

The three-day workshop brought together 24 Latin American cities to learn about and exchange ideas on developing vibrant, sustainable neighborhoods and promoting urban biodiversity as strategies to create greener and more resilient cities. 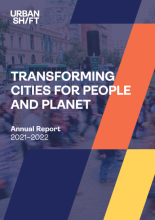 UrbanShift's inaugural annual report serves as an inspiring portfolio of the program's first year in action as well as a handbook for our strategy to achieve sustainable, low-carbon growth in more than 23 cities across three continents.